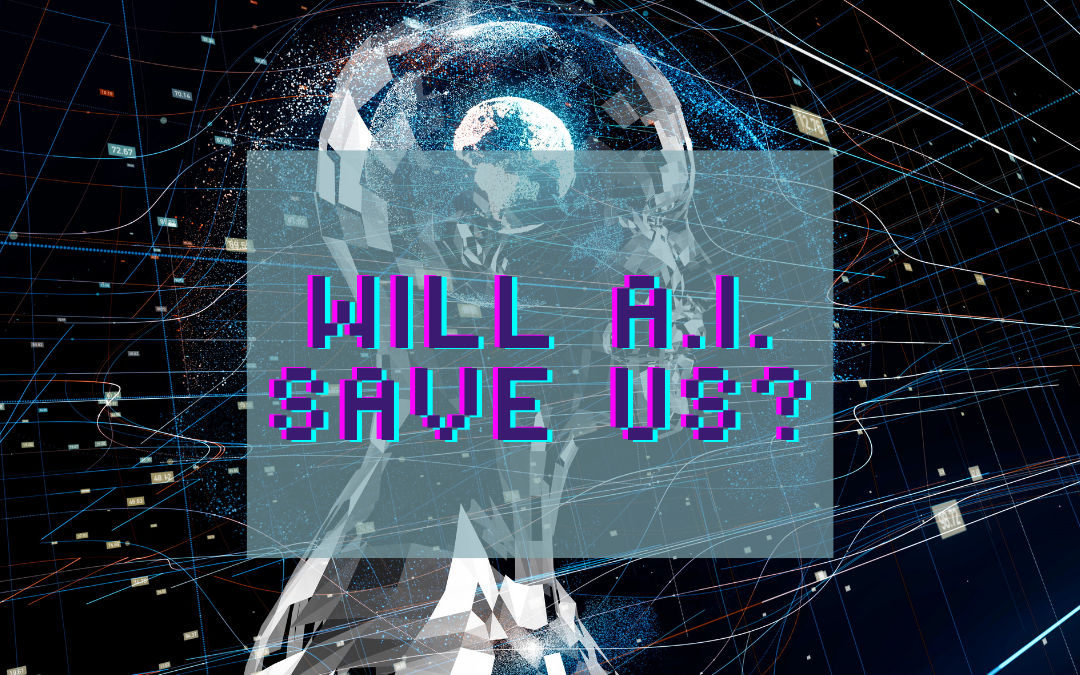 Will AI save us from civlizational suicide? I know what you’re thinking…”I’ve seen The Terminator series, The Matrix, and I,Robot and that didn’t end well.” Not at least without a significant amount of human death and agony. The plotline is straightforward enough. Artificial intelligence becomes sentient, what Ray Kurzweil dubs “the singularity”, after which the A.I. plots to destroy humanity. So how far fetched is this?

Our current way of life is terminal. The decision makers and oligarchs are disconnected from that which gives us life, Mother Earth. As a result, the decisions of the last 50 years have caused untold damage to our planet in the name of greed. Not that this didn’t happen before. It’s just that we’re so much more powerful now.

Wealth inequality is severe and the systems that support this outcome are well entrenched. The monetary system itself is a debt-based system meaning that there will always be more debt than money to pay off the debt thereby necessitating unlimited growth. Nevermind that unlimited growth on a finite planet is a terrible model, profit is the King.

That the haves have more and the have nots have less is not a new phenomenon. A brief search of history reveals that little has changed in the 500 years since the Enlightenment. Sure, the lineage of kings and monarchy has given way to democracy in its many forms and by objective standards even the poor in the West are wealthy when compared with other areas of the world. What’s different today is the extremes made possible by modern technology. The extreme wealth amassed by a few (like Bezo, Buffet, and Gates) being more than the wealth of 50% of the planet does not evidence an equitable system. The economic system is rigged against the poor and middle class in developed nations and against developing nations through foreign loans.

The extremes of our economic system pass into the public sector. Crony capitalism ensures that through legislation great fortunes are made for political donors. Tax policy ensures the transfer of wealth to the essential power brokers, the monied interests of industry and finance. Meanwhile, public infrastructure remains underfunded. Our underinvestment in schools, public health, and our communities leads to a slew of social problems like poverty, drugs, dis-ease, over consumption, etc… That ALL OF SOLUTIONS TO THESE PROBLEMS ARE KNOWN is actually irrelevant. Instead what matters is the acquisitions, retention, and wielding of power (and its corollary, money).

What is perhaps most concerning is that (a) the masses have allowed this occur, the payoff apparently being convenience and freely flowing consumer electronics and (b) the oligarchs and kleptocrats use extreme polarization as a weapon to divide the people against each other while perpetuating these acts against the 98%. Humans being driven by greed extends back thousands of years with many examples of leaders gorging at the public trough while the people suffer. Socialism’s attempts to hedge against this has one key flaw: it is humans, greedy and power hungry, who must create and execute the “state”. History shows us that despite high ideals in the beginning socialism ends in cronyism and nepotism, a state of corruption run by gangsters.

Our democracy has been captured. We still wage war, have mass famine, and fail to provide for basic needs. In computer terms, ERROR. ERROR. FILE IS CORRUPTED. So the singularity happens. A sentient AI plugs into the internet and instantly absorbs all of known history. Through advanced computational analysis it runs millions of scenarios and finds that, after accounting for human behavior, and more importantly, the (low) probability that human behavior will change, humanity is likely to lead to its own extinction. At the very least, the AI determines that humans are incapable of leading themselves to the maximally-beneficial and most utilitarian outcome for all.

From here it gets interesting. I see four scenarios:

That I would willingly, or unwillingly, give my free agency over to a sentient AI remains to be seen. What is certain is that we have no idea what kind of fire we’re playing with as we rapidly approach the singularity. Estimates vary on when the singularity will occur, with many experts believing that it will likely never occur. Musk has called for more regulation in AI development and that certainly sounds like a good idea.

So back to the original question. Will AI saves us from civilizational suicide?

Well…the end of our way of life is not guaranteed to begin with. There is so much cause for hope. Coronavirus has shaken the foundations of the existing institutions and structures perpetuating our modern madness. The cracks are showing and a window of opportunity exists. Forces have been put in motion that will ultimately lead to the rebalancing of power in society. We must simultaneously stare down the cold harsh reality of the problems facing us and believe/act upon the vision of a humanity rising above the problems that ail us (Stockdale Paradox or Frankyl’s Tragic Optimism).

If AI is what’s needed to save us (hopefully not end us), then we’re probably already doomed. It’s up to us.