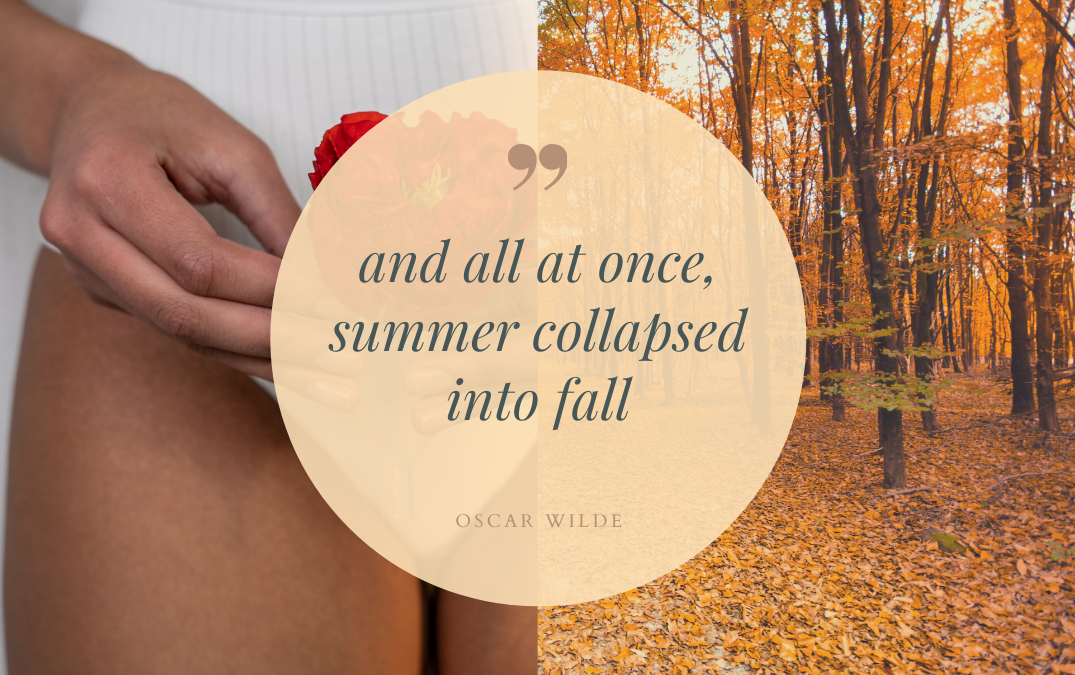 She has her rhythms. They come and go.

The word itself pays homage to its Greek ancestor periodos meaning orbit, recurrence, or course.

We’re currently back again in the West. I know this season.

I’ve been tracking her and Yin since the East during Spring when fresh renewal bloomed outward desire creating clarity and new life.

Summer soon arrived with Yang in the South with her fertile, beautiful, and sexual potential.

We’ve arrived again in the West, Fall marking the end of growth and Qi has stagnated with the mood as the temperature becomes sensitive.

Soon again we’ll return with Blood for the release in the North, her time for rest and the turn inward to hibernate as the temperature chills.

Many of us have grown disconnected from intimate knowledge of her ways.

Her truth and wisdom is hiding in plain sight. Ever present.

Beckoning a relationship. To plant. To grow. To harvest. To regenerate.

The change is constant. Ever becoming the next season.

Inviting this moment to be recognized. Appreciated.

This time will come and go. While it’s here let’s consider a question…

…how best can we know this period’s medicine?

Each period is different.

Each season has its magic and its mysteries.

Some can be penetrated. Some can’t.

She dances with the masculine.

His action not-so-subtly influenced by her temperature.

If he’s astute, he has learned her intricacies, ever humbled by her depths.

If he’s wise, he enthusiastically embraces each season for its gift.

After all, is it not She who sustains life?

He may not know it, but he longs deeply for the recognition she too desires.

For him to awaken from his stupor.

For him to demystify this complex living system.

For him to live in harmony according to her needs.

He knows she can be a real bitch, particularly when not treated right.

Fanned by the flames of self-absorption and rising waters of disregard.

This may not end well.

She’ll keep going. Cycling with or without him.

He’ll wisen up. He has to. Lest he be destroyed in the fury of Kali.

No one wants that. Except maybe Kali. Maybe.

This wisdom must be cultivated. Together.

She tuned into herself and he to himself and each to each other.

She needs him to be powerful for himself.

To know his own cycle, a much faster revolution with greater potential for con- or de- struction.

To know his own ways, his gifts of clarity, action, direction, and force.

To know his own shadow, his anger, pride, greed, and fear.

She doesn’t need him, really.

And her invitation comes at great cost to him.

“Bring your self in your fullness. Or not at all”, she says.

She knows the damage he has and could cause.

She needs to be tended. Because she’s tender. Her balance is delicate.

Thrown off by the thrashing of boys-not-yet-men who know not what or how they do.

She’ll bloom again, even for him, if he has followed the Noble Path.

And in those moments his armor will be melted by her splendor and radiance.

He’ll lose himself in her wilderness, the wild man himself revealing his majesty.

He’ll bellow from his depths and she’ll echo these reverberations joyously embracing his appreciation.

She wants his presence.

“Put the phone down”, she doesn’t say as her fields fallow and her bloom blights.

She wants nothing more than for him to affix his attention to her.

The tragedy’s that the hole in his heart he’s been filling with the wrong things can easily be filled by a deeper relationship with her.

To be known and celebrated.

To bear her fruits.

Writer’s Note: This post will be tagged under the Masculine category because it’s required knowledge for men.

Knowledge of her cycle – of the planet, the seasons, the lunar procession, and of her estrogen cycle – is an essential well of wisdom required for all men who need to be in Right Relationship with the feminine.

The cycles are explicitly linked. The Medicine Wheel with its four cardinal directions maps perfectly with Chinese Medicine, the estrogen cycle, and the four seasons. Coincidence? It can be mapped in its vagaries yet only understood through experience. “She” is our mother, sister, partner, lover, and our planet. Knowing one will inform the other.

With her the planet, know the seasons well. Experience their profundity and unique medicine. Track the cycles of the moon. Understand the rhythm of how food grows. Tend her. Remember that our choices matter and that we can throw her out of balance. She’ll vastly outlast homo sapiens. Align our actions to bring harmony and longevity to her.

She’ll return our effort to know her intimately with great abundance. Know her anyway, despite this. And steadfastly continue deepening the relationship with self, the one who knows her. It is in the height of our eminence and the depth of our essence that we are becoming Kings calling forth our Queens.

We thank you for your patience. We’re catching the waves…