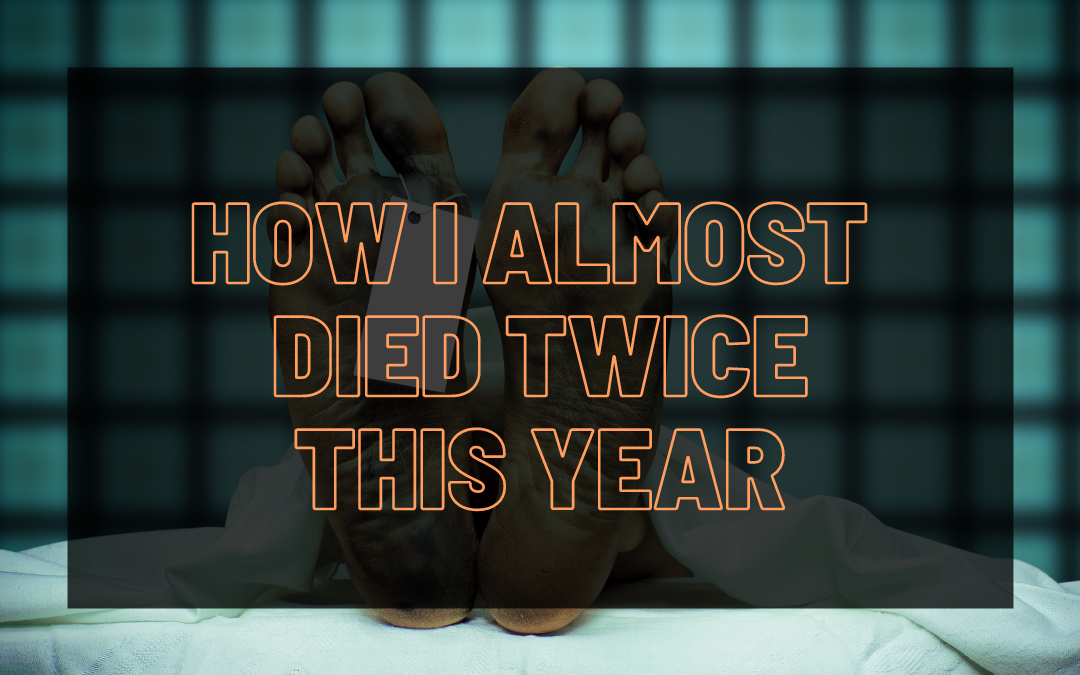 I almost died twice this year. It happened in a fraction of a second. That I’m alive is a testament to the deep wisdom inherent in the body. Here’s what happened…

In January I was north of Puerto Vallarta at a beautiful beach resort for a Shamanic retreat. Each day we studied and learned, ate merrily as a group, and enjoyed free time exploring the beach. One night after dinner the group decided to go up to the yoga room on top of the hill to dance ecstatically to some tunes. After breaking it down on the dance floor the jungle heat got the best of some of us and we went out to the balcony which stands roughly 20 feet above the poured concrete path below.

Feeling flush and tired from a day of learning, I was sitting on the top railing of the balcony, a 4-inch diameter piece of wood which seemed sturdy enough. With my feet dangling and my full body weight on the railing all of the sudden the railing began to fall. Time moved into slow motion. I felt the sensation of falling. The body began to drop backwards. Instantly my butt pushed off the railing propelling it backwards and me forwards into a squat. I stood up and looked calmly at the group of alarmed people around me absent any adrenaline or realization of what could have just happened. It was only when I looked over the balcony and saw the distance to the ground that I fully realized how serious a fall backwards could have been.

Fast forward to late October to when my father and I are driving south from our cabin in the northern woods of Michigan. We’re on a two-lane road surrounded by incredible fall color and I was feeling leisurely. Then I get a hit, “pay attention.” I sit up and refocus on the road as traffic is moving about 60 miles per hour. Less than 30 seconds later an oncoming car veers over the center line into our lane and I quickly swerve to avoid a head on collision.

During the railing incident I believe the body saved my life. There was no cognition in pushing off the banister and simply standing up. It was a completely instinctive reaction that happened in a fraction of a second. Conscious thought would have been too slow for that moment. In a similar way the body knew something was coming on that two lane road. I don’t know from where I received the message. Yet the body instantly perked up in perfect timing.

After each incident I spent the next minutes and hours in gratitude to the inherent wisdom of the body. Still to this day I affirm how appreciated and welcome this body’s natural instincts are in the future.

Perhaps this is the primal brain in action. Perhaps my guardian angels are looking out. Perhaps this body and I have an agreement about what this life has in store for us. Regardless of the mechanism of how these events unfolded I attribute them to a phenomena outside of my conscious awareness. I am grateful for my health and safety.

Just this past week I was riding my mountain bike very fast around a curve that I take frequently. Something distracted me for a fraction of a second, enough for me to realize that I had too much speed and was heading straight into a steel abutment that runs along the river. I quickly pulled the back brake, laid the bike down, and leapt off the bike as it careened into the steel cables. In the air I instinctively put my arms out to brace my fall and hit the concrete with enough force that I skid across the pavement on my hands.

In many situations hitting the pavement on your wrists like that would easily break the wrists. And somehow my wrists are not broken, the pads of my hands were barely scraped, and almost no blood was drawn. Now my hands are very sore and may take weeks to recover. Yet in that short window the body was flying in the air its instinctive processing placed the hands at such an angle as to transfer the impact through the soft tissue rather than the bones.

For all you are

For keeping us safe

What we do together

Bring on the B.O.

The Best Feeling in the World